Don’t Call It a Stimulus: Breaking down the Coronavirus Relief Package

Last weekend President Donald Trump signed the Coronavirus Aid, Relief, and Economic Security Act into law, an unprecedented $2.3 trillion aid package aimed at relieving some of the hardships of the economic slowdown caused by the outbreak of the novel coronavirus in the United States. Passed with broad bipartisan support, it is the third round of federal government support that Congress and the President have signed into law to address the epidemic. It follows a $8.3 billion boost for public health funding and the Families First Coronavirus Response Act.

The legislation focuses its greatest impact on seven main areas: individuals, small businesses, big corporations, hospitals and public health, federal safety net, state and local governments, and education. For more details, NPR breaks down specifically how the CARES Act aims to help each of these groups.

To visualize where the spending will be allocated, the Committee for a Responsible Federal Budget (CRFB), a nonpartisan, non-profit organization committed to educating the public on issues with significant fiscal policy impact, has created a helpful infographic: 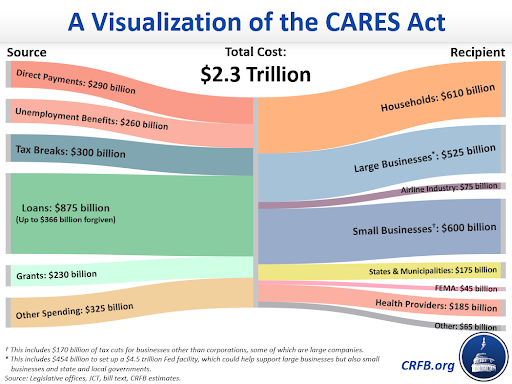 The CARES Act has received broad support across the political spectrum. Even many organizations and groups that are frequently critical of increased federal spending have acknowledged that running high deficits is necessary in times of crisis like this one.

“This is a national emergency, and it is exactly the kind of time when we should borrow money as necessary to help deal with this emergency,” Maya MacGuineas, president of the CRFB, said in a statement last week. She urged lawmakers not to play politics with the novel coronavirus response.

“While it’s unfortunate we are entering this crisis already over-indebted and running trillion-dollar deficits, this is not the moment to let our large deficits stand in the way of responding quickly and aggressively,” MacGuineas added.

While many on both the left and right take issue with certain details in the CARES Act, the consensus across the political spectrum is that getting aid to Americans quickly is of the utmost importance amid a rapidly evolving crisis comparable to wartime conditions.

“The CARES Act is a positive step forward to provide economic relief to individuals and businesses facing hardship or economic ruin due to this crisis,” a group of experts at the Tax Foundation said in an in-depth analysis of the legislation’s many components. They pointed out, however, that some aspects of it had room for improvement.

Don’t call it a stimulus

While the facts of the legislation are straightforward, many analysts and supporters have gone out of their way to clarify that this is not a stimulus and should not be described as such.

“No economic policy can fully end the hardship so long as the public health requires that we put so much of our commerce on ice,” Senate Majority Leader Mitch McConnell, R-Ky., said in a speech on the Senate floor last week. “This isn’t even a stimulus package. It is emergency relief. Emergency relief. That’s what this is.”

Other conservatives underscored this point.

“What is before Congress is not a stimulus bill,” the editors of the conservative magazine National Review wrote. “We have often opposed stimulus bills in the past, considering it a mistake for the federal government to borrow money to expand a depressed economy. At the moment, though, the government is not trying to expand the economy or even arrest its contraction. It is principally trying to enable the temporary shutdown of much of the economy with the least humanitarian damage.”

On a conference call Monday discussing what is in the CARES Act, Marc Goldwein, senior vice president and senior policy director for the CRFB, said it is different from stimulus measures taken from 2008 to 2011 to address the effects of the Great Recession. In the case of the Great Recession, wealth had declined and stimulus spending was passed to get the economy back to where it was. The nation’s response to the COVID-19 pandemic is unlike most recessions in that Americans are being asked to participate in a “partial state of (economic) hibernation” when they otherwise would be able and willing to participate in the full range of economic activity. The CARES Act’s primary goal, therefore, is simply to keep people afloat so they can afford essentials like rent and food and to prevent businesses from going under so that they can resume normal economic activity once the public health issues surrounding the virus have been solved.

Goldwein estimates that the economic support provided by the CARES Act is roughly equal to everything the federal government did from 2008 to 2011 to stimulate the economy in the aftermath of the Great Recession. Given that the COVID-19 epidemic is expected to be a much more disruptive event, Congress will almost certainly be passing additional relief measures, including actual stimulus bills, in the months to come. Trump is already calling for a $2 trillion infrastructure bill as a “Phase 4” relief package, and House Minority Leader Nancy Pelosi, D-Calif., has outlined a list of priorities that she wants to address with a follow-up bill. Those priorities include increased protections and equipment for workers on the front lines of the coronavirus, expanded paid leave, new infrastructure investment and more funds for state and local governments.

McConnell, for his part, is adopting a more cautious “wait-and-see” approach.

If the virus spreads and exacerbates the growing public health crisis, Goldwein said that the next bill Congress passes to provide relief to Americans could be just as large as the CARES Act.

A case set to be heard by the Supreme Court this year will decide an issue that has long...

It has now been over a year since the Covid-19 pandemic placed its grip over much of the globe....

BE THE FIRST TO GET NEWS UPDATES